Recent attempts to sell a 2011 Nissan LEAF have resulted in no sale being made. A few LEAF’s did successfully sell on eBay earlier this year, one went for considerably more than list price. 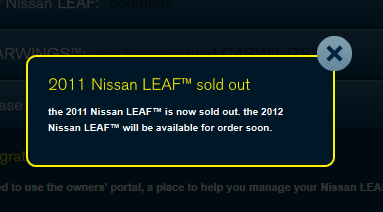 The 2012 model will sport improvements over the 2011 model, but the price of the LEAF will also increase by 7-10% depending upon the model chosen. Faster charging is one of the key improvements made to match the charge time of the yet to be manufactured 2013 Ford Focus Electric car.

Nissan have not yet revealed the total number of 2011 LEAF’s that have been manufactured and sold. Initially they planned to make/sell 20,000 in the first year. With sales just over 4,500 half way through the year, the total number may fall short of this initial goal.

Interestingly the Nashville Journal reports that only 28 LEAF’s have sold in Tennessee. I wonder how much this is due to demand or supply. I have been waiting since I ordered in March, maybe Nissan just aren’t delivering here in any volume just yet. They can’t expect to record sales in Tennessee unless they actually deliver some cars. One never knows, the 2011 LEAF may become a sought after collectors item, or just another Edsel. Time will tell.