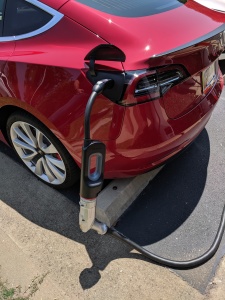 The Model 3 has just gained the ability to use a Tesla to CHAdeMO adapter through a recent firmware update. I have yet to receive firmware version 2019.24.4 that enables the adapter, however a work colleague got the update on his Performance Model 3  and we drove over the Nissan HQ in Franklin TN to test it out.

The good news is that the CHAdeMO adapter is identical to those used on Model S and X vehicles, the interchangeability is very welcome.

What everyone is really waiting for is the CCS adapter for North America, which should be capable of speeds up to 120 kW and be priced more affordably than the huge CHAdeMO adapter.