Toyota’s Prius is a popular Hybrid vehicle. In March 2012 Toyota started selling the Plug-in Prius, affectionately called the PiP. After April 2014, (much to the frustration of potential buyers) Toyota began restricting manufacturing volume of the vehicle and the last PiP was sold in September 2016. In total 42,344 PiP’s were sold in the US.

This is the first time I have seen the PiP in the wild. Here it is charging at the Whole Foods Market in Franklin TN. 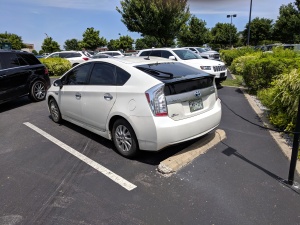 PiP from the rear

Toyota now make another plug-in Prius they call the Prius Prime. Sales began in November 2016 and in just over two years the sales have eclipsed the original PiP and currently stand at 56,500 as of April 2019. The PiP must have been a limited pilot program and the Prime is being sold at  an average rate of 2,000 units per month.

The all electric range of the PiP and Prime are very meager. The PiP can only manage about 11 miles on a full charge. The Prime can travel about 25 miles on a charge, which is not quite enough to cover the average commute distance of 32 miles return in the US.

The Prime also charges at the rear passenger side of the vehicle just like the PiP. I have never been comfortable with a rear charging port. This is one of things that I dislike about my Model 3, straight parking spaces are easy enough to back into, but space that are at a slanted angle are setup for pull in not reverse in and its very awkward reversing into a slanted space.