Posted on December 3, 2016 by jpwhitehome

End of life for the old battery

Even with workplace charging I only had 8 miles to spare on a full charge. Fall temperatures reduced the range from what I was getting in the summer. With a cold snap due any day it was clear I’d struggle to make the journey to Nashville on a full charge and keep myself warm and the windows defrosted. So I decided to go ahead and buy a new battery for the LEAF.

The process took longer than anticipated. Getting the battery delivered to the dealer took almost a month. Newton Nissan commented that the amount of paperwork involved for a customer purchase is much more than a warranty replacement. This is the first customer purchased replacement that Newton Nissan have done so they were unfamiliar with the process. The new battery is a 2016 style battery which is slightly different in size and shape to the 2011 original. Adapter brackets and new cables are required to make it fit. As a result a typical 4-5 hour battery swap turned into a 4 day process. Newton Nissan thought they had all the parts but overlooked the new under car battery covers they would need. I had a loaner car so the inconvenience was minor. 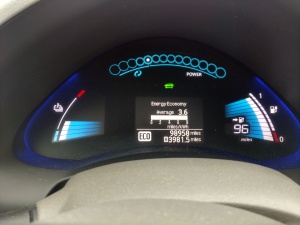 The new battery should be better than new. The 2016 battery I bought (first introduced in 2014) is known in the LEAF community as the “Lizard Battery”. This new battery should be capable of withstanding hot summers better than the original. I’m not holding on too much to that promise, the original battery did not perform as well as Nissan guidance suggested it would. So it’s once bitten twice shy for me this time around. It should at least last another 99,000 miles and hopefully many more at which point the car will probably be worn out itself.

Still waiting for my Tesla Model 3

I had hoped to replace the LEAF with the new Chevy Bolt EV rather than buy a new battery. However GM recently announced that they would be releasing the car on a slow release schedule instead of the nationwide launch at the end of 2016. Local GM dealers were not able to tell me when or if the car would be available in Tennessee. I just couldn’t wait until the car became available. Other choices such as the BMW i3 didn’t appeal given that  200+ mile EV’s such as the Chevy Bolt EV and Tesla Model 3 are now on the horizon.

So it looks like GM may have lost a sale. The likelihood of me converting my Tesla Model 3 reservation to a purchase just went up.