Replacing a Faulty Blink EVSE with a Clipper Creek HCS-40P

Old Trusty started displaying self-test faults. Time for a new unit before it starts a fire.

My trusty Blink EVSE which I have had for 4 years as part of the government sponsored EV Project started acting up, displaying several self-check faults. It still worked after power cycling, but I was uncomfortable with the frequent self-test faults, I didn’t want to burn the house down.

The Blink was installed using a 6-50R NEMA outlet. I purchased a Clipper Creek HCS-40P EVSE that came pre-wired with a plug that would fit the outlet to eliminate the need to hard wire the unit thereby preserving the codes compliant installation also saving the need to re-apply for building permission.

It seemed like a very straightforward thing to unplug the old unit and plug in the new unit which only required two screws to attach it to the wall. For some reason quick weekend projects tend to expand to fill the available time. What I thought would take 10-15 minutes took several hours.

Rotating the outlet was easy

First I had to reconfigure the orientation of the 6-50R outlet. The Blink’s cable exited from the left side of the unit and plugged into the wall. The Clipper Creek cable exited from the right and the cable was too short to run left under the EV cable to the outlet, it needed to exit to the right requiring the outlet to be rotated 180 degrees. This operation was easy and took 15 minutes and I thought I was home free.

Attaching to the wall – Fiddly 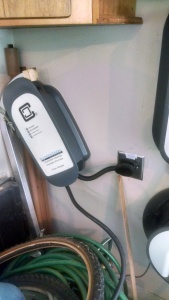 I got a ‘Third Hand’ by plugging in the unit, the stout cable supported the unit while I marked screw holes.

The Clipper Creek comes with two huge lag bolts to attach it to the wall and for hollow walls they advised screwing it into a stud or plywood back board. Given the short cable to the outlet a convenient stud was not available and I didn’t want to fit a plywood back board and paint it.. I chose to use a hollow wall fixture instead. I had one which saved me a trip to the store in the busy saturday morning traffic

The hollow wall fixture seemed ideal until I put the screw through the EVSE mounting hole and realized due to the thickness of the plastic case, the screw didn’t quite reach the hollow wall anchor. A trip to Home Depot was in order to find a longer #6 coarse screw and a larger washer. Saturday traffic was heavy and the trip took over 30 minutes.

Mounting the unit directly under a wall cabinet made the job fiddly. The screw holes to anchor the unit are angled to allow a screwdriver to reach the screw at an angle. However the cabinet prevented a screwdriver from fitting and I had to resort to a stubby screwdriver in tight quarters. That took way too long. The bottom anchor and screw went in quickly, I plugged the unit in and switched the power back on at the breaker and now I have a fully functional EVSE with 3 year warranty.

All Done – Better unit all round. 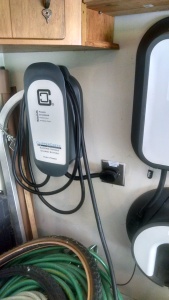 The Clipper Creek HCS-40P comes standard with a 25 foot EV cable. This means I can now plug the car in either of the two garage bays. The Blink cable was too short to make this possible.

The Clipper Creek HCS-40P can also support up to 7.7 kW charging rate using 32 AMPs at 240 Volts. The Blink was originally rated for 30 AMP charging but due to a number of issues with overheating components, some of which damaged vehicles, the network operator reduced the charge rate to 24 AMPs. The reports of badly crimped EV cables overheating also gave me reason to buy a new unit rather than try and repair the old. I can now charge a new EV at double the speed than is possible with my older LEAF without fear of a fire or vehicle damage.

Unfortunately the Clipper Creek does not have on-board intelligence so I cannot easily meter the electricity going to my vehicle, so my monthly charging records on an Excel spreadsheet will be retired.

The Final Step. Turn the power back on!!