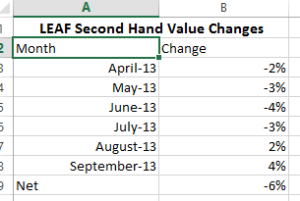 I’ve been tracking the used value of my LEAF and the depreciation has been steeper than the average vehicle. However in the last two months used LEAF prices have increased by over 6%. Nissan are selling all the LEAF’s they can make (or choose to make) and buyers are now turning to the second hand market, where up till recently bargains could be had. The car dealers lament was that no one wanted to buy a second hand LEAF. Now new cars are scarce people are seriously considering used models, many less than a year old with low miles.

My LEAF’s value, according to Kelley Blue Book, fell over 12% from April 2013 until July 2013. However in August and September 2013 its value has rebounded over 6% recovering half of the losses for the year. If this keeps up over the next two months, then the value will have held steady for the year. By all accounts the new LEAF shortage may continue for several more months as Nissan source the parts necessary to manufacture the batteries.

Nissan have said that supply won’t match demand until late 2013 or even into 2014 depending upon the demand this fall. One thing isn’t falling this fall, and that’s the price of a LEAF.