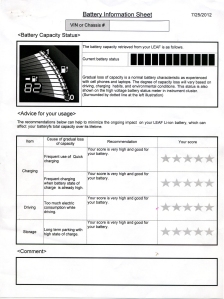 It hardly seems like one year ago I took delivery of my LEAF. I remember it was raining, not a great experience driving off the lot in a new car. Had an accident with a deer in the first three months, my very first deer strike in 20+ years of driving the roads of Tennessee. This resulted in the car being off the road for over 3 weeks. However the experience overall has been very positive. Here’s my experience to date.

The car simply hasn’t broken down. I had anticipated that being a early adopter of new technology the car would be in the shop often. Not the case with the LEAF. The only faults it has had has been a slow to close passenger door window, which was repaired. There is an intermittent fault with the passenger speaker cutting out from time to time, sounds like a lose wire. Hasn’t been a big enough of a problem to take it in.

The car is very quick off the blocks. The instant torque available at rest  is very welcome driving around town allowing one to switch lanes effortlessly. Acceleration is always instant, it never hesitates like a gas car. At high speeds the car also accelerates harder than one would anticipate. However the instant torque can fool one into thinking you are driving a very powerful car. Over just over 40 MPH acceleration is nothing spectacular, but the great acceleration below 40 can fool you into making maneuvers the car isn’t capable of at higher speeds. A little more raw power would be nice, but overall it is a quick car to drive.

The average monthly fuel cost is $25. When I explain the monthly cost to people their next question is invariably “ah but how much does it add to your electric bill”? $25 dollars I say, and the penny drops. It’s all electric, they finally get it.

Some criticize the under-steer typical of front wheel drive vehicles, but I think the car handles very admirably and nimbly. When faced with an emergency maneuver on the interstate, the car is very sure footed and I feel in control at all times despite the firm steering and braking inputs I give it. This is a very safe car to drive.

This is simply put the quietest car I have owned. Road noise can be intrusive at higher speeds and over rough tarmac. Riding on a new road surface reveals how whisper quite this car can be, if only the noise insulation were better.

The suspension jars somewhat over bumps in the road. It’s not as noticeable as with the Altima, but not quite what I’d like to see in a car of this caliber.

The seats are fine, but not great. The cooling is great, but the heater is both insipid and a huge energy hog. The 2013 model promises to remedy the heating problem.

Great headroom!! Very tall people have sat in the LEAF and been surprised how much headroom there is to spare.

Being a hatchback we have been able to haul 46″ TV’s and furniture. Couldn’t do that in either of our previous vehicles.

An extra 25 miles range would make all the difference to me. However I have been able to make nearly all my trips in the LEAF. I had anticipated needing to resort to a gasoline vehicle more often. As time goes by one becomes confident in the cars overall range, smarter at predicting range and planning trips.The charging infrastructure has grown a  lot in the year I’ve owned the LEAF, which is encouraging. Once the federal grant runs dry, I suspect the infrastructural will not grow very fast in Tennessee after this year. Electric cars are not well received by consumers here.

I have come to the conclusion that quick charge stations are the answer to limited range. With the introduction of a quick charge station at Nissan Headquarters, we can now take trips to south Nashville I would never had entertained in the LEAF before.

Recent stories of rapid battery capacity loss in Phoenix AZ has me concerned that the battery may not last as long as Nissan lead me to believe. I had hoped the battery would last 8 years or more, longer than I will own the car. I’m not so sure anymore. I’ve taken precautions to keep the car as cool as possible, parking in the shade at work, leaving garage doors open at night to let it cool. I’m also charging later in the evening. I hope the Phoenix battery problems are resolved soon, this could mar what up to now has been a  very positive experience.

I don’t want to go back to a gasoline vehicle again. When the LEAF wears out, I’ll get another EV. Whenever I have to drive a gas car, the crudeness and nosiness of the car becomes instantly apparent. Gas vehicles suck. Their only saving grace is that they can go a long way on a tank of gas.

The EV experience is so positive, we are considering replacing the Altima with the Ford C-Max Energi when it is released later this year. The Ford will give a Chevy Volt like experience (plug-in electric plus a gas engine for when the battery runs dry), but it comes in a small crossover SUV format!!