After one year, how my new battery is wearing 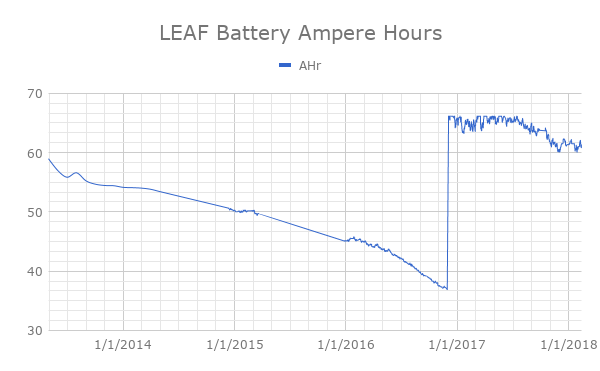 Chart of how the LEAF battery has worn

Lithium Ion batteries typically lose capacity at a faster rate when new and then one can expect the rate of loss to taper off as it ages. The odd thing about the new LEAF battery is that it lost no capacity for the first 8 months. This is highly unusual and one can only speculate why this is. I’m sure Nissan would not comment on the inner workings of their battery as it is proprietary.

My theory is that Nissan have added extra “hidden” capacity to the new battery packs and the battery management system (BMS) makes capacity available from the hidden reserve when needed, until there is no reserve left after which its business as usual.

The old battery lost about 6% per year over its lifespan. The new battery has lost 4.7 ampere hours of capacity which is a rate of 4.3% per year. Sounds better than the old battery. However if I measure the rate of loss from 8 months of age until today the battery is losing capacity at a rate of 9% per year. Whoa!

This is partly explained since the period from 7/17/17 until 2/13/18 includes July and August the two hottest months of the year. Heat is not a friend of lithium ion batteries. So to be fair I compared a similar period from 7/1/13 until 2/1/14, however during the same hot months the old battery lost capacity at an annual rate of only 4%.  Hmmm, that does not sound good for the new battery.

There are many factors that contribute to battery wear.

I can only compare statistics for my new and old batteries which were used at different times and subject to different use patterns. While heat is major contributor to lithium ion battery wear, driving speed, acceleration and rapid charging can have a significant impact as well. I suspect that higher percentage of interstate driving in recent years has contributed to additional wear on the new battery.

No Better no worse

When I have had the new battery for 20 months I will be able to calculate a full year of continuous wear since the battery started to lose capacity at the age of 8 months.

Comparison to other electric vehicles

Competitive EV’s from Tesla and GM appear to fairing better than Nissan EV’s with less than 5% loss after 100,000 miles of driving. The technological differentiator is that Tesla and GM use active thermal management in their battery packs. This adds extra cost and complexity to their vehicles but does appear to be very effective at preserving their batteries.

LEAF’s in Europe fair much better than the southern states of the US. This is due to the lower temperatures in Europe. Active thermal management of EV batteries is necessary in warm and hot climates.

This entry was posted in Electric Car, Nissan LEAF, Review. Bookmark the permalink.