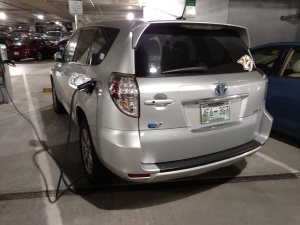 Seeing a RAV4 EV is much like spotting a unicorn. Especially in Tennessee.

Toyota sold just 2,492 of the second generation RAV4 EV’s in the US starting in September 2012 until the end of 2014. (A handful were sold in 2015 after production ceased in September 2014). Additionally the RAV4 EV was sold only in California as a compliance vehicle to meet the California CARB regulations. The production run was deliberately limited to 2600 vehicles. Tesla provided the battery and drivetrain for this vehicle.

The vehicle is registered to someone in Davidson County Tennessee. Where the owner gets this vehicle serviced I’m not sure. It was only sold in California so trained mechanics will not be available here locally. The vehicle was purchased at Carvana. Carvana have created themselves quite the niche in second hand EV sales. I’m pretty sure this was transported from California by Carvana to make the sale.

An electric SUV is such an obvious car to make in the US where SUV’s are very popular. Very few electric SUV’s have been made, the Tesla Model X being the most popular despite its steep price tag of over $100,000. The RAV4 EV sold for about $50,000 new and has a range of about 120 miles in extended range mode, which back in 2012 was a market leading range. Toyota still have a webpage dedicated to the RAV4 EV, which assures owners they can still get service despite the car being discontinued. A brief paragraph on the RAV4 EV is followed by advertising for the Toyota Mirai Hydrogen Fuel Cell vehicle, also a California only compliance vehicle.