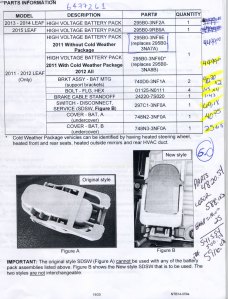 For those of you following my LEAF blog you may recall I predicted that my LEAF would need a new battery within the year. Well that was a year ago and it needs a new battery, The fourth capacity bar went out at 88,000 miles. Even with a full charge the low battery warning goes off as I get close to work.  I used to be able to get 80 miles or more out of a full charge, 45 miles is about the limit now.

Appeal made to Nissan Corporate

I decided to appeal the decision anyway and contacted Nissan Consumer Affairs and opened a case with them on the basis that if you don’t ask you don’t get. After opening the case I sent a letter explaining the basis for my appeal. Here is the letter… NissanLeafWarrantyDeclineRebuttal

The appeal went much further than I anticipated over a period of 10 days. The Consumer Affairs agent told me that the glowing reference my dealer, Newton Nissan of Gallatin gave of me as a “model customer” made a difference and they did seriously consider a goodwill action on my behalf. However the process did not bear fruit and the appeal was ultimately denied.

Nissan feel that since I have got 90,000 miles out of the car, I have got my monies worth. I respectfully disagreed with that assessment. More alarmingly the Consumer Affairs agent said that “for an electric car” 100,000 miles is phenomenal. Presumably if I had purchased a traditional gasoline car I could expect much more from my investment? So it seems Nissan do not rate the durability of their own electric vehicle batteries and that a $6,000 repair bill every 100,000 miles is OK.

By comparison – Chevrolet Volt, 100,000 electric miles with no signs of wear.

A Chevrolet Volt owner has over 280,000 miles on his vehicle of which 100,000 have been in full electric mode, with no reported signs of battery degradation. The Volt’s owner said “This is the only vehicle I ever purchased that I feel like I got more than I paid for”. It’s a shame I can’t say the same.

Battery durability issues aside, the LEAF has been an excellent car with almost no issues to speak of. I prefer to drive electric and my next car will be electric. Once you have driven electric there is no going back. GM with their Volt have proven that it is possible for an EV to go over 250,000 miles without a huge repair bill.

I do have a reservation for a Tesla Model 3, but that will not be available for over a year at the earliest. I’m not sure I’ll be able to wait quite that long. A used Model S as also a possibility, however they are still a little expensive at $50,000 used.

Chevrolet are releasing their Bolt EV which will go over 200 miles per charge this coming October. Given Chevrolet’s durable batteries, this might be a good trade, if it comes to Tennessee. 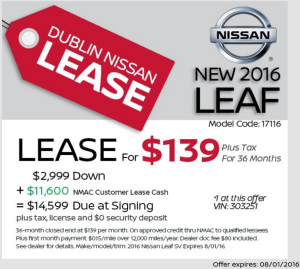 Nissan are selling LEAF’s in California with $11,600 off with NMAC financing resulting in a lease cost of just $139/month. This is appealing given that I save between $100-$200 per month in fuel costs (depending on the price of gas). The availability of such a deal in Tennessee is unknown. $6,000 would pay for a lot of $139/month lease payments. At the end of the lease a good number of 200+ mile EV’s should be on the market, maybe even some pre-owned.

I plan to drive my LEAF to 100,000 miles on the small chance the battery fails altogether, in which case it will be covered under warranty. That will take me 4 more months, so I have some time to decide what to do. My employer plans on occupying a new office building in October which will cut my commute in half. “EV parking” has been promised. It’s not clear if “EV Parking” is the same as providing charging stations, one assumes so. I’ll find out soon enough. If there is charging available I should be able to make the 20 mile drive each way even with a degraded battery.

I may even decide to go ahead and replace the battery after 100,000 miles anyway. Here’s hoping for a price reduction.

Thank you Newton Nissan for being so supportive!! You have provided excellent service for my LEAF and my wife’s Altima over the last 5 years. I’ve enjoyed interacting with Jamie and David in service and Kelsey in marketing.

I read the story of another LEAF owner who’s car needs a new battery at 58,000 miles but is just 3 weeks past the 5 year capacity warranty. It seems Nissan are being hard nosed, have in fact abandoned their early adopters and will not make goodwill efforts for them.

I read recently that a Tesla Model S has been driven as a chauffeured vehicle for over 200,000 miles with minimal battery degradation. The owner of the vehicle, Tesloop a startup high-end chauffeur service, charges the Model S to 100% every day, which is against Tesla’s battery management guidelines and it has still been very durable.

Tesloop started to notice odd behavior when the battery reached a low state of charge and the car simply shutdown. Tesla confirmed this is a software defect associated with high mileage batteries. Tesla will fix the defect in the next 3-4 months. But rather than have their customer wait for the software fix they swapped out the battery at no charge even though the battery itself isn’t faulty, just a tad worn. Compare that customer service experience to the one I received at Nissan’s hands.

Read more at Inside EV’s