Blink increase cost of EV charging by 140% in Tennessee and many other states.

Posted on September 2, 2014 by jpwhitehome

Starting September 2nd 2014 Blink have changed their fee structure. In many states they are switching to charging per kWh, which is both fair and advantageous to owners of older LEAF’s that charge more slowly than recent models. In states that do not allow per kWh charging (which includes Tennessee) Blink will continue to charge by time. However instead of leaving the rates the same they are now billing per minute, anywhere from 4c to 6c per minute depending on membership status.

Previously charging was $1 per hour, rounded up to the nearest hour. Under the new scheme 1 hr of charge the EV owner will pay $2.40 per hour. (4c x 60 Minutes). To be fair to Blink the per minute charging does avoid paying for a full hour of charging if one remains plugged in 5 minutes past more than an hourly increment. But being more than double the rate; on average the consumer will pay considerably more. Assuming under the old rate structure the hourly rate could average out at $1.50 per hour due to rounding the rate increase is about 60%.

Rapid charging has also increased from $5 per session to $6.99 per session, a more modest 40% increase in cost. This translates to a minimum of 8c per mile for LEAF owners, with the benefit being closer to 12c per mile since cars are rarely empty when arriving at a charging station. Essentially the same cost as a gasoline car. At these rates, usage will be restricted to emergency charging only.

Blink (owned by Car Charging Group) no doubt are trying to charge a rate that makes their business profitable. The business model for a stand alone charging network is questionable. With the promise of longer range EV’s in a few years, public charging use will probably diminish further putting further financial pressure on the charging networks. I don’t see stand alone charging networks surviving long-term.  If charging networks fail financially or simply price themselves out of the mainstream market, the value of EV’s from Nissan, Ford, GM etc will go down in the eyes of consumers while the value of an EV from Tesla will go up thanks to the free Supercharger network they own and operate. Elon Musk was correct to build his own network that is not subject to the business models of others.

If the sticker shock is too much to bear, refer to a previous blog post I made listing free charging locations in Tennessee.

Below is the email received from Blink regarding the rate structure changes. 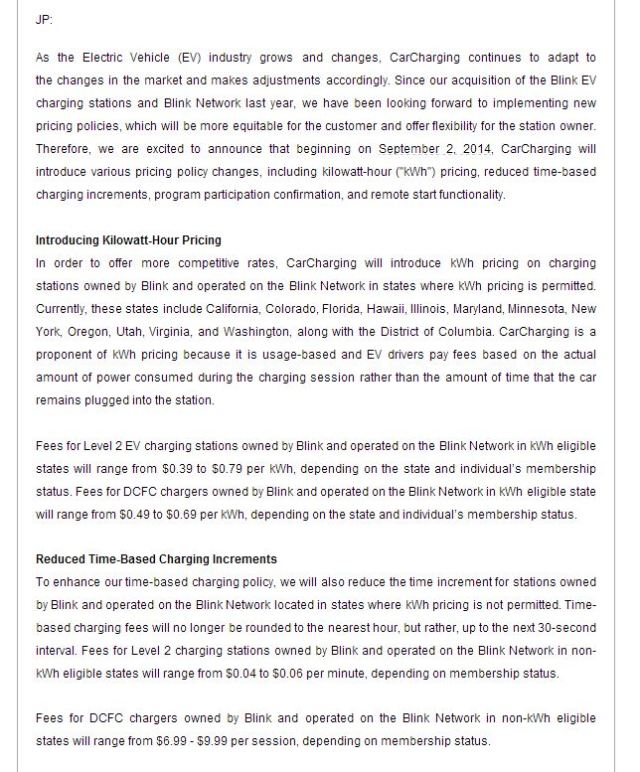 4 Responses to Blink increase cost of EV charging by 140% in Tennessee and many other states.